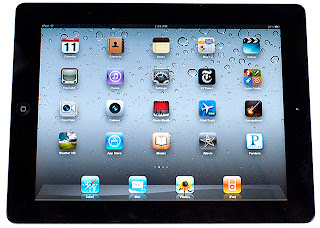 I celebrated a significant birthday recently, one with a zero, as regular readers may have noticed, and my work colleagues very generously gave me a three figure sum of money as a present. I had thought about buying a Kindle with the cash, but my brother suggested instead putting a bit more to it and buying an iPad 2 which can do everything a Kindle does and much much more. So for the past two weeks I've been getting to grips with the incredible and beautiful piece of technology that is an iPad, and I'm very very impressed with it.

I have to confess that I don't like iTunes, I much prefer Windows Media Player, and so despite having nothing against the behemoth that is Apple I have never bought into their products, except for a tiny little iPod shuffle I bought to use in the gym which then forced me to download and use iTunes for that sole purpose. This then is my first real foray into Apple.

The iPad, a 16Gb wi-fi one (I don't need a 3G one since I can create a wi-fi hotspot with my HTC Sensation Android phone and use the iPad through that if I need to) worked straight out the box, and it was pretty much effortless to set up both email accounts (my personal one and the one for the choir of which I'm the administrator) despite them being IMAP ones linked to Domain names belonging to me so not quite as easy if if they were, for example, Hotmail, Yahoo or Gmail ones which are all pretty much fully automated/supported by the iPad. Having already bought an 'iPad for beginners' magazine from W H Smith (courtesy of another birthday present - a voucher for that store) I already had in mind what I was going to do its all the privacy/location type settings and breezed through it all.

So I've now been playing with it for a couple of weeks and the verdict is that it's a frighteningly good bit of kit. In particular I love the way the maps work blisteringly quickly, and selecting the address of one of my contacts and having maps open and instantly show me it (with street view if available) is brilliant.  And despite not being a fan of iTunes, I think I've decided that when it's time to change my mobile phone it's likely to be an iPhone I go for, simply because I can already see how all the Apple products seamlessly integrate with each other, and while I've managed that to a large extent, linking Outlook on my Windows Vista PC with iPad via the iCloud Windows plug-in, the Android phone has been the stumbling block.

In fact, up to now I've seamlessly linked Outlook Calendar with my phone by using Google Calendar as an intermediary (uploading automatically from PC to Google Calendar, and then automatically from Google Calendar to a free Business Calendar App on my phone) but what the Apple iCloud dashboard for Windows didn't mention before I installed it is that it actually deletes your Outlook Calendar and Contacts, and copies both into a brand new folder on Outlook called iCloud which is the one you need to look at / update on the PC. The problem with this for me is that Google Calendar can only sync with the default Outlook Calendar, which is now empty as iCloud has removed everything from it over to their own folder.  So I now have nothing in my calendar on my ophone apart from birthdays if they're linked to contacts.  So I have a choice - either sync Outlook with my phone or with my iPad.

I'm thinking about changing the way I do this because I can sync Outlook with the iPad via iTunes and if I'd known what iCloud was going to do with my contacts and calendar I would never have used it to sync them, but before I uncheck the 'sync with iCloud' box and tick the 'sync with iTunes' one I need to make sure the contacts and calendar now living in iCloud won't disappear, because they're the only copies I have of that info. In the unlikely event anyone has read this far - any experiences/advice/suggestions in that regard would be welcome.

Hopefully once I start syncing via iTunes I can restore my default folders into Outlook and my phone will then once again contain my diary!

Oh, and this is the first post I've written using the iPad, and although they're there as I type this, using the preview it looks like its missed out all the paragraph breaks, so it may be there's a glitch with the preview screen or it may be I'll need to post it then log in from my PC or laptop and sort out the formatting. I already failed to be able to upload an image since I couldn't browse to find it in my camera roll! So, good technology, but has some limitations (or maybe the limitations are in my knowledge as a user).

*Update - yes, it did miss all the paragraph breaks, I had to log in and edit it on the PC, and the image was uploaded during that edit
Posted by Layclerk at 10:58

Layclerk
A singer in Anglican church choirs since childhood, I have been singing (on and off) in the choir of a Scottish Episcopal Cathedral for over 30 years. I'm a member of the Institute of Advanced Motorists as an advanced motorcyclist and car driver, and formerly an IAM Qualified Motorcycle Observer. I tend to swear a lot, which is often reflected in my posts since I try to write in much the same way I speak, but if you don't like my language then don't read my Blog, and certainly don't consider coming to the pub with me!

Links of the moment